“Black’s Grill,” I would say as I answered the phone, pen poised in hand, ready to take another order. I’d write it down on a ticket pad, then tear it off and stick it above the main grill. Whoever was manning the grill would put on any necessary burgers and buns, and pass the ticket on down the line. As the fry cook, if I took the order, I’d go ahead and get the fries from the freezer and put them in the basket, to dip down into hot, yellow-brown oil.

My two favorite parts of the job were the people and the free meal every day. The people I worked with at Black’s were there because they needed a job or wanted this particular one. Our boss, Barbara Hastings (who later passed it on to her son), was a phenomenal boss who cared just as much about her employees as she did her business. I think she knew it takes good, happy employees to make a good restaurant. My coworkers were like family to me. Those ladies taught me a lot about getting along with other people and caring. They had been through hard times, so they understood more than most people do. I wasn’t a rich kid, I was just trying to help make money for myself and for college. So I understood, too. I worked there for over two years, and those years at that job taught me more than many other jobs I have had. I learned hard work and I learned what kind of worker I was: someone who valued quality, attention to detail, and who would get things done when she saw they needed doing.

Today, I’m a schoolteacher and I don’t get to man the deep fryer anymore, or carry up large boxes full of fries from the basement. I don’t get to occasionally work the grill or dress the sandwiches. But I still go back to Cherryville from time to time to get a taste of that good old food so characteristic of my time there. And when I taste my first sip of a hand-crafted cherry lemon Sun-Drop, I know I’m in the right place. 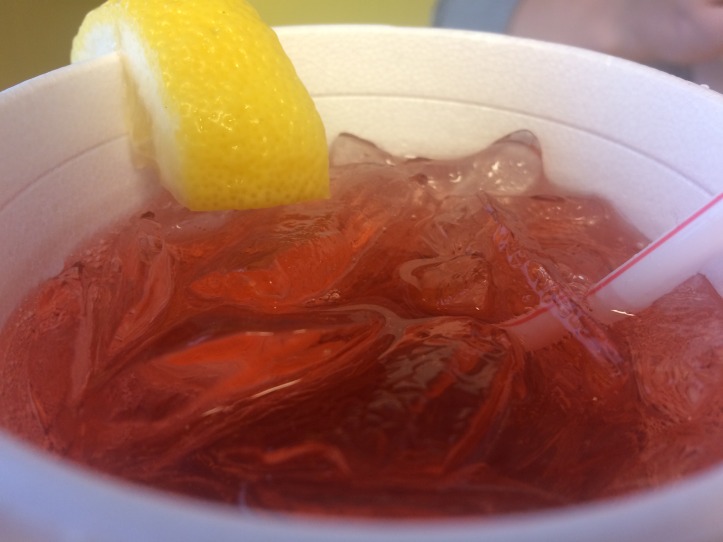 So what can you get at Black’s Grill? Oh, Lordy, where to start! Here are a few of my favorites. First, you have to get that cherry lemon Sun-Drop, because the waitress will make it with Sun-Drop, real cherry juice, a lemon, and cherries mixed in. It’s a powerfully refreshing drink. For food, Black’s has one of the best hamburgers in the world. Thick, perfectly-grilled, hand-pattied, juicy, hearty burgers with plenty of cheese on a toasted bun. We used to toast the buns with a thin layer of mayonnaise on the underside and lay ‘em straight on the grill. (Don’t tell my dad. He hates mayonnaise.) They have a mean hamburger steak, and another of my favorites is the grilled chicken melt: a grilled chicken breast on Texas toast with grilled onions and cheese. Get mayo, lettuce or any other toppings you like.

One good thing to know about Black’s: the default sandwich topping is slaw, tomato, pickle. I still go places and get slaw and tomato due to my love for it at Black’s. (They make slaw fresh every day, and there were quite a few times I made it myself. It’s a no-sugar slaw, just freshly chopped cabbage and plenty of cold mayo. It’s pert near perfect.) You can also get any number of other things like hotdogs, chicken patty sandwiches, corndogs, and more. They have a delicious Poorboy, ham and cheese on a hoagie bun, or Half and Half, ham and cheese on one half and a small cheeseburger on the other half of a hoagie bun.

Perhaps the king for me though is the grilled cheese. I’m serious. Black’s will trip you up because they have two versions: a toasted cheese and a grilled cheese. Be not fooled – they are not the same. A toasted cheese is your typical grilled cheese – cheese toasted between two slices of buttery bread. But a grilled cheese sandwich is another beast entirely. Here’s how it’s done: they take a fresh slice of American and plop it right on the grill, then put the bottom half of a hamburger bun on top of it upside down. They let the cheese cook and harden until it’s brown and crispy on one side, then use a spatula to scrape it up, while holding the bottom bun, then flip it right-side-up onto a sandwich paper. The sandwich dresser tops it with slaw, tomato, two small pickles, and salt and pepper, before capping it with its top bun. It’s then wrapped Black’s style. Let me tell you. I have never gotten a grilled cheese as good as this anywhere and my husband and I have eaten local food in more than 30 U.S. states. When you bite into that fresh, cool slaw and tomato, and taste it all mixed in with that crispy, toasted, melty cheese…there ain’t another taste like it. Even when I get another menu item, or even a basket, I get a grilled cheese to share with someone, too.

When you first walk into Black’s, you might feel a little out of place, or time. That’s because the people who go there are mostly regulars. But it won’t take long before you’re greeted and treated like family. And it won’t take long, if you live close by, before you’re a regular, too. I don’t live in Cherryville anymore, but I stop by when I can. It is always worth the stop. They’ve also done some snazzy retro redecorating inside and I must say, I really like it, from the Cherryville-themed mural to the antique fry baskets hanging on the walls holding ketchup packets and such. One word of warning: the parking lot and the dining room are cozy, so try to go at a less busy, less typically-lunch time of day.

Thinking back to tickets, Black’s Grill was one of two food jobs I had where someone sent me home with order tickets before I started my first day. I was encouraged to study them and the menu to learn what was offered and how to write it. And study, I did. I was a nerdy kid. Today, I’m so glad I had that job, that when I walked in to meet Barbara for the first time, she was willing to give this homeschooled kid a chance, and that when I started to work there, I became a part of the Black’s Grill family. I miss those times. But what a blessing it is that Black’s Grill is still there – and hopping with business! – as a reminder of what’s important in life: treating people, and feeding people, right.

We LOVE @238cherokee’s Buffalo Chicken Dip with Pita! 🤤
🍦🤤 Chocolate Pot Hole Ice Cream 🔥🍫
@grillmarksofficial in downtown @visitgreenvillesc serves 🔥 burgers and fries! 👍👍
The recently opened @yummmdonut in @gogastonnc puts a certain beloved Southern chain to shame IOHO. 😯 Yeah, we said it. The donuts are more robust, flavorful and memorable than said competitor. 🍩 🥊 #FightinWords #FoodFight Everybody who eats donuts has a strong opinion about the best donuts. We have a few favorite mom-and-pop shops in the region west of Charlotte that are our favorites. In time, Yummm could join our list of go-to donut shops. In our opinion, Gastonia sure needed a unique local donut shop. Now for a local bookstore! 🤔📚
@superchix_fortmill has the sauce, y’all! 🤤😋 Incredible chicken, a sauce bar and seasoned fries! They have custard, too. 😯 If you or someone you eat with loves chicken tenders or sandwiches, this is THE place for you. We were VERY impressed. 👍👍
@thehootnannie in Forest City, NC is a party for the senses! Jammin’ music, elite burgers and Q, and tasty cheese curds as advertised! 🥳 @visitforestcitync and check it out, y’all! 🤤
Loading Comments...
%d bloggers like this: