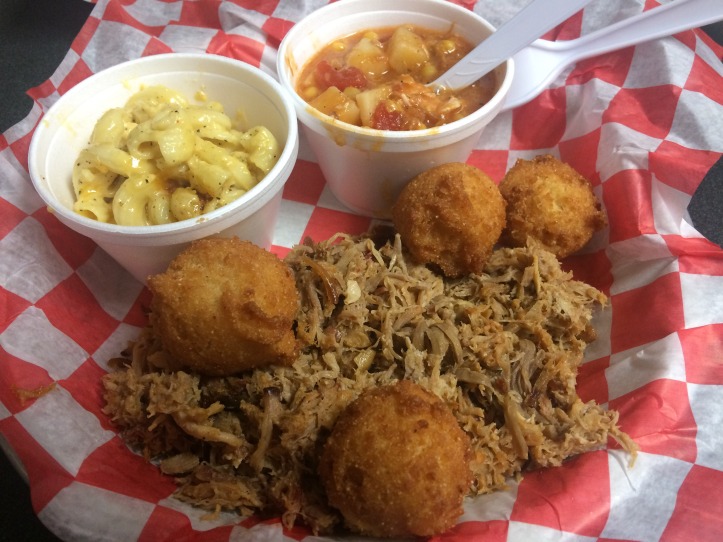 I’ve savored barbecue from corner to corner of North Carolina, but South Carolina is a different story. I realized recently that I couldn’t name even one prime barbecue restaurant in South Carolina that I could recommend to a BBQ-loving friend. So, of course, we had to change that.

Earlier this year we came across Carolina BBQ—perhaps the most common name for a barbecue restaurant in either of the Carolinas (seriously, there’s one almost everywhere it seems)—and I added it to my #FoodieScore scouting list for the state of South Carolina. (We receive a lot of “you have to eat here” recommendations, and each one goes on a list that changes almost daily. Thank you for your great suggestions!) Luckily, Carolina BBQ is in Spartanburg, which is about a 90-minute roundtrip from our home in Shelby, N.C. And it just so happens to also carry Southern Living magazine’s endorsement as the best barbecue in the state of South Carolina. 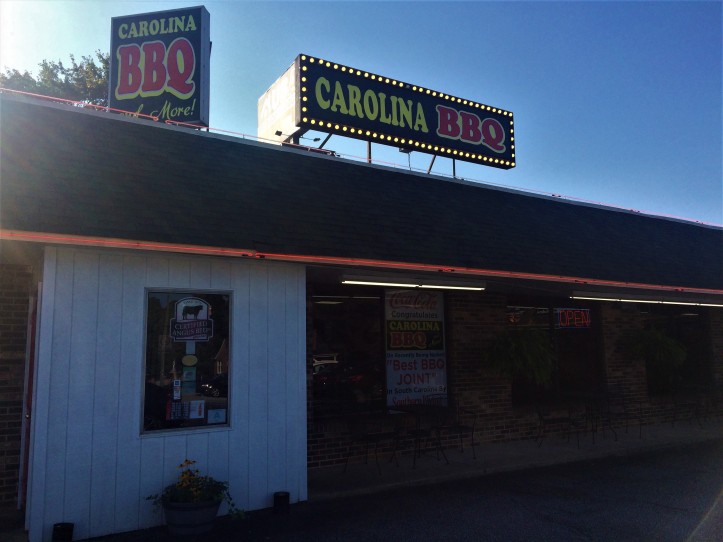 Normally, I’d classify barbecue restaurants into two categories, legendary dives and modern Q shacks. Carolina BBQ is almost a solid hybrid of the two. From the outside of the place, you almost get the sense you’re about to venture into a decades-old kingdom of delicious meats and sides. When you walk in the door, it feels like a new-age take on the old lunch counter experience, with bar-and-stool and booth seating available.

Then you hit the menu, and you continue to toe the line of old school and new school. Carolina BBQ plates a hearty assortment of Carolinas BBQ favorites. We’re talking pulled pork (always my first meat choice at a Carolinas BBQ establishment, and theirs was a nice mix of meaty and seasoned), sliced pork and half chicken, the stuff you read on the menu of an iconic barbecue spot. But keep reading because there’s also St. Louis ribs, beef brisket and smoked turkey, and that’s just the meat. 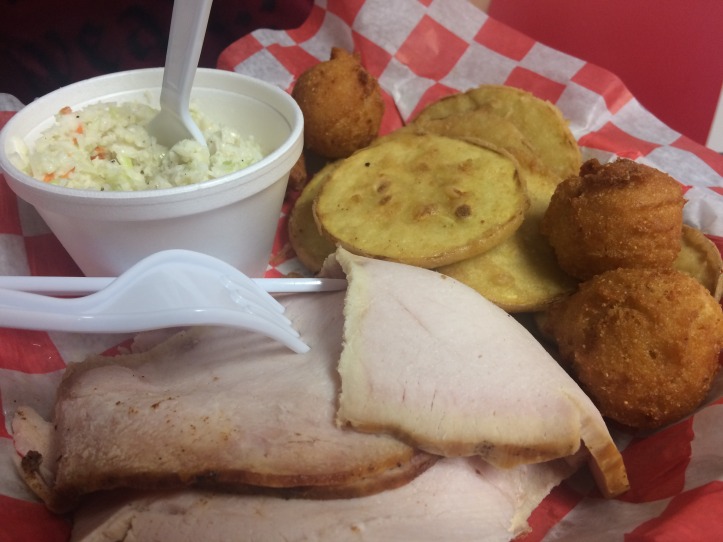 The side dish lineup is strong, including creamy, thick, hearty mac & cheese, the biggest fried squash you’ve seen in your life, creamy and crunchy coleslaw, and quite possibly the best Brunswick stew I’ve ever eaten. For folks not familiar, Brunswick stew is a thick soup that usually contains lima or butter beans, vegetables like potatoes, tomatoes and corn, along with shredded meat and spices for flavor. A cup of Brunswick stew is the perfect warmup on a cold day, and I’ve eaten my share of it from my days living in Eastern North Carolina. Carolina BBQ’s stew will also delight folks who are more familiar with the term “chili” or “chili beans” due to its warmth, richness and spice kick. 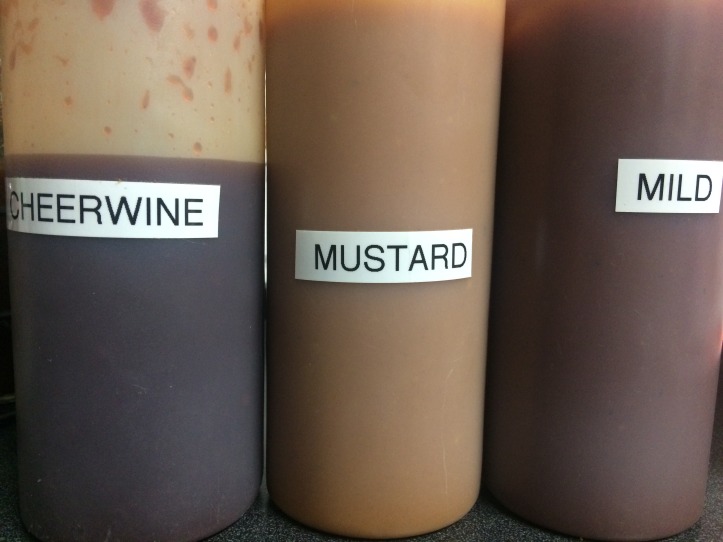 Of course, a restaurant’s barbecue sauce of choice is always a heady question, and that’s one place Carolina BBQ functions as more of a modern Q shack. There’s no one sauce to rule them all. You get three on the table. When I think of South Carolina barbecue as shared by the traveling experts, I think of a mustard sauce, and Carolina BBQ’s is a good one, with a solid influence of mustard but almost a smoky-sweet side to it as well. There’s also a “mild” sauce that, to me, had more of a kick to it. And finally there’s a Cheerwine sauce that tastes more like Cheerwine than any Cheerwine BBQ sauce you’ve ever had in your life. If you love Cheerwine, you have to try it first, especially if you’re not already drinking the soda by the same name, so you can tell the difference. The sauce is a ringer for the taste of the North Carolina-based soda that celebrates 100 years in 2017. I had to sample all three sauces in separate areas of my plate, and I couldn’t pick a clear favorite. They’re all good. 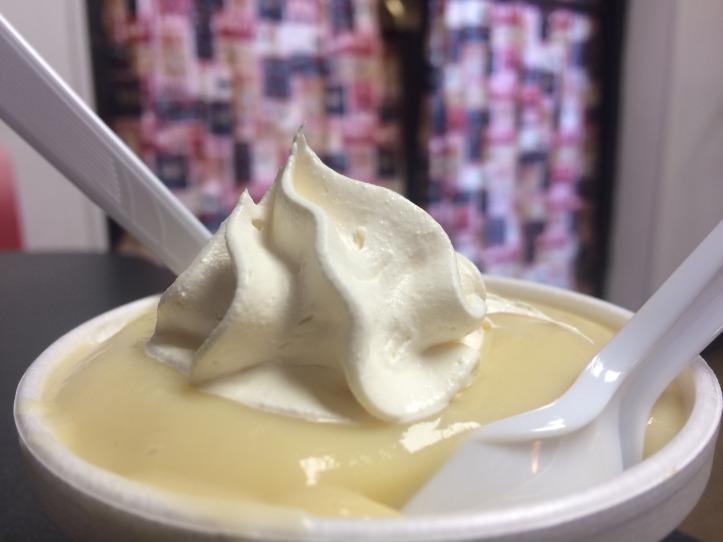 My pork plate came with two sides AND four hushpuppies (so did my wife Molly’s savory smoked turkey plate, of which there was so much that she took half home), so we had plenty to eat without dessert. But how could we resist either the deep-fried brownie bites or homemade banana pudding? We went with the banana pudding, which is unlike most you’ll find in our part of the South. The pudding is sweet, light and almost airy, not heavy at all, filled with fresh banana slices, and all on top of a crunchy pecan sandie-like cookie base. When you dig in with your spoon, dip all the way to the bottom to get a solid crunchy bite of that cookie as you scoop up through the pudding, the bananas and the whipped cream. For someone who likes to get creative in the kitchen, the Carolina BBQ banana pudding is a delightful new take on the classic Southern dessert.

Carolina BBQ offers both the classics as you’ve come to love them and favorites with new twists—and we loved both angles—so I might have to create a new “hybrid” category to describe similar barbecue restaurants. One thing’s for sure: This Spartanburg Q shop has plenty of choices for you, and they’ll all come at an affordable price. We savored two plates, two drinks and dessert for $23. Not bad at all for a filling Saturday dinner!