The scone is known most commonly as the high-brow, slightly sweeter cousin of the Southern biscuit. Why does it carry this mildly uppity reputation? It’s most likely due to its origin in England, and that causes Americans to conjure up thoughts of tea and crumpets, yes, with pinkie sideways in salute. At best, the scone is a modern coffeeshop counter baked good, still too sophisticated for old-school Southern foodies who prefer a cup of black coffee—don’t dare add cream or sugar—with a couple eggs and dry toast.

All that may be true, but like all foods we must ask: Can’t a scone just be made simply and enjoyed without all the perceived necessary pomp and circumstance of being a scone? Just as Jean Girard enlightened stockcar racer Ricky Bobby in Talladega Nights that crepes are just “really thin pancakes,” a scone really is just a sweet biscuit that might or might not be shaped like a triangle.

We discovered that the answer is yes, scones are simple to make and can pretty much be enjoyed just like the biscuits with which we’re most accustomed on the Southern table. We only noticed two differences between our family biscuit recipes and these similar bread treats. They’re lighter and, as evident by now, a little sweeter by nature.

Scones can be enjoyed by themselves, with coffee or tea, or alongside your typical Southern breakfast favorites. However, we recommend you make a batch with this recipe—adapted from one by The Cordon Bleu-trained English baker Mary Berry—and enjoy a couple alongside a dollop of fresh homemade whipped cream and a spoonful of your favorite jam or jelly. 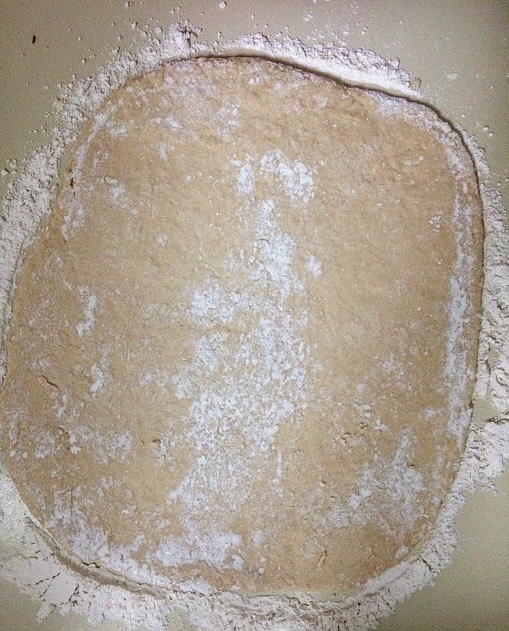 2. Add flour to bowl and rub in cubed butter with fingertips until mixture resembles fine bread crumbs. Stir in sugar.

3. Break egg into a measuring cup and fill the cup to the 2/3 mark with milk. Beat lightly and add to bowl. Mix until it forms a soft dough. It may be quite sticky, and that’s what Mary Berry recommends in her original recipe. If you desire, add just a little bit more flour at a time to make it slightly less sticky, but don’t add too much.

4. Knead dough on a floured surface until smooth. Roll until about ½ inch thick, cut into rounds (or triangles, if you desire, as we did), and put on a lightly buttered baking sheet. Brush each piece of dough with milk.

5. Bake for 10 minutes until they rise and are golden. The scones are best served fresh. You can freeze them after they cool and then allow them to thaw at room temperature and then freshen for about 10 minutes on moderate heat in your oven.

This recipe yielded about 20 scones for us, and that meant they were 65 calories apiece, not including any toppings.

🍦🤤 Chocolate Pot Hole Ice Cream 🔥🍫
@grillmarksofficial in downtown @visitgreenvillesc serves 🔥 burgers and fries! 👍👍
The recently opened @yummmdonut in @gogastonnc puts a certain beloved Southern chain to shame IOHO. 😯 Yeah, we said it. The donuts are more robust, flavorful and memorable than said competitor. 🍩 🥊 #FightinWords #FoodFight Everybody who eats donuts has a strong opinion about the best donuts. We have a few favorite mom-and-pop shops in the region west of Charlotte that are our favorites. In time, Yummm could join our list of go-to donut shops. In our opinion, Gastonia sure needed a unique local donut shop. Now for a local bookstore! 🤔📚
@superchix_fortmill has the sauce, y’all! 🤤😋 Incredible chicken, a sauce bar and seasoned fries! They have custard, too. 😯 If you or someone you eat with loves chicken tenders or sandwiches, this is THE place for you. We were VERY impressed. 👍👍
@thehootnannie in Forest City, NC is a party for the senses! Jammin’ music, elite burgers and Q, and tasty cheese curds as advertised! 🥳 @visitforestcitync and check it out, y’all! 🤤
🍳🥓🍅 Have we mentioned we’re breakfast-for-dinner fiends? 😏 Tonight: homemade biscuits, bacon and eggs, with our last homegrown tomato of the season ❤️
Loading Comments...
%d bloggers like this: