The Civil War—with Burgers and Wings 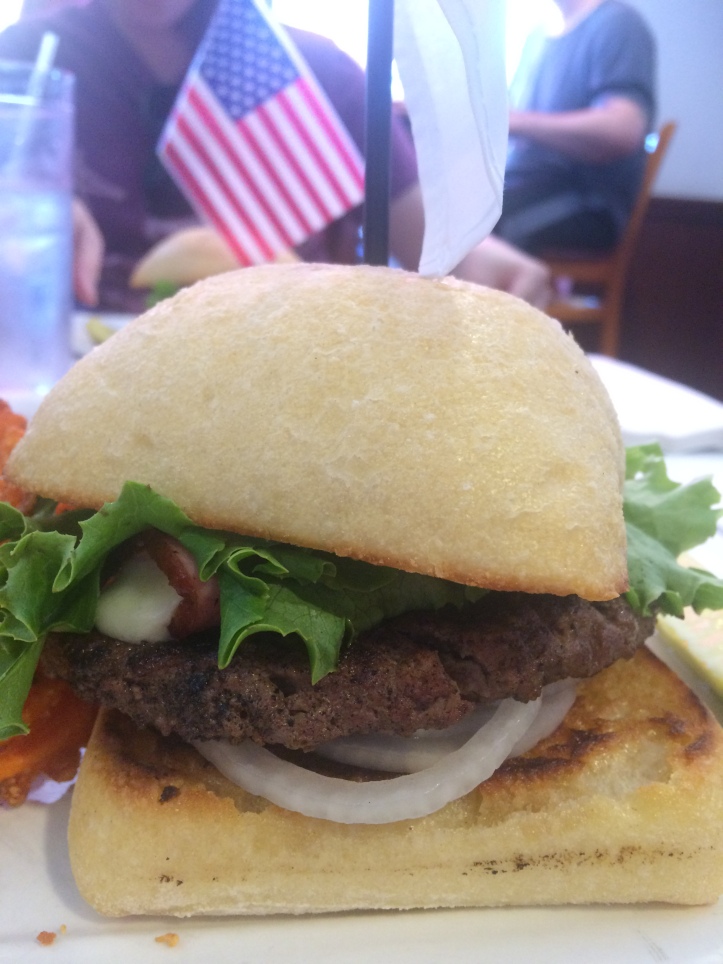 Sorrow. Solemnity. Serenity, somehow. Those are the feelings with which I emerged from a 20-plus-mile trip up and down the battlefields of Gettysburg National Military Park in south-central Pennsylvania. It was in those fields more than 150 years ago that thousands died and many thousands more were wounded during three days of battle that many historians agree helped change the course of the American Civil War.

Gettysburg, both the small town just a few miles north of the Mason-Dixon Line and the interspersed battle sites, feels like holy ground to me. I’ve set foot on other places that match its power, but I’m not certain I’ve ever walked anywhere that exceeded it. For me, it packed the multiplied significance of a visit to a national cemetery. From the sweeping countryside views while perched in a tower on the famed Little Round Top to the chilling artwork memorial that is the North Carolina monument carved by Gutzon Borglum of Mount Rushmore notoriety, every foot of Gettysburg is a gripping walk through history. We may write primarily about food, but there’s no denying the importance of this place in our nation’s preservation.

There’s so much to see and feel, in fact, that you work up quite an appetite by lunchtime if you begin touring early in the morning. Thankfully, the town of Gettysburg offers several great restaurants to feed hungry history buffs. One in particular, though, caught our eye while surveying the local shops prior to our trip, and it did so by offering an extensive connection to the Civil War.

The Blue & Gray Bar and Grill, located right on Lincoln Square in the heart of town and just a few miles from the national park visitor’s center, sells a menu of half-pound burgers that each connect with the name of a Union or Confederate general during the Civil War. There’s the Robert E. Lee with Virginia ham and Swiss cheese, which I thoroughly enjoyed. You can order the George Meade with Philly cheesesteak, Cheese Whiz, peppers and onions. (After all, you’re just about two hours from Philadelphia.) Or there’s the Winfield Scott Hancock, which my wife Molly ordered for its Chipotle rub, pepper jack cheese, avocado and cilantro-lime aioli. And it was a flavor explosion of epic proportions! You can comment below on the cannonry pun now. There are a dozen themed burgers in all. The topping combinations are excellent, but we also greatly enjoyed that each comes atop a fresh ciabatta bun, a special touch we enjoyed as a change-up from the usual basic burger bun you get most places.

More in the mood for wings when you visit? Blue & Gray offers more sauces than you can shake a bayonet at. Get it? OK, I’ll stop now. But seriously, the list of flavors is long, and it includes a super-heated Gettysburg Ghost variety that requires a signed waiver, as well as the Devil’s Den, the Rebel Yell, the Peach Orchard and many more. We didn’t have wings on our visit, but the menu makes us think it’s the perfect place to get a smorgasbord of differently sauced birds and share with a group of friends or family members.

Gettysburg has the typical touristy aspects you’d expect of a town with such a draw—but they don’t dominate the landscape the way they do at many other destinations. We absolutely salute the community, its leaders over the years and the National Park Service for helping keep the place a fitting tribute to the hallowed, even if harrowing, American history that happened there so long ago. And we were delighted as foodies to find that the history is strong enough to continue to make its way around the dinner table. Even if you don’t find yourself engaging in a deep debate about the Civil War while you’re relaxing at the Blue & Gray, you can enjoy seeing which sides each burger eater takes when the sandwiches arrive with the corresponding American and Confederate flags.

🥵 Nothing like @Koolaid on a hot day! Thanks, @hotplateclt!
Tomato Pie: ‘one of the best flavor combinations of everything we make’ 🍅 recipe link in our bio now!
Bang 🍔 Bang 🍔
The Pete’s Burger does not play. 🤤 Half a pound of grilled beef, crispy bacon, sautéed mushrooms, melted Swiss cheese, lettuce, tomato and mayonnaise on a soft bun. 😋
🤤 Flight of Pancakes with Virginia Ham 😍
Shoutout to The Taco Wagon in Appomattox, Virginia 💚🌮 We had some amazing food there this past week! Appomattox’s food truck game is strong!! 💪 They are parked everywhere in the community, and other towns could learn from them! #TacoTuesday
Loading Comments...
%d bloggers like this: