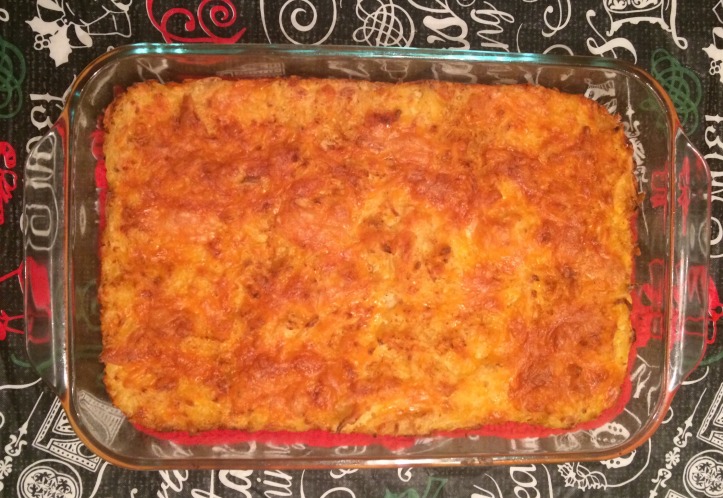 My wife Molly’s dad requested a hash brown casserole for our family Thanksgiving meal this year. I knew it was a side dish we’d have no trouble making, but I didn’t know it was a dish that would lead us on quite an adventure.

We have a wonderful reference shelf of cookbooks in our home, and it’s rare I need a recipe I can’t find in one of the books, so I turned again to our printed resources for Hash Brown Casserole. Finally, after quite a bit of flipping pages, I arrived at a simple recipe originally submitted for a Springfield Elementary School cookbook in the 1990-91 school year. Better yet, this recipe is credited to Jimmy (we called him James) and Cathy Honeycutt, a boy who was a friend of mine later on in elementary school and his mom.

So, we made the recipe for Thanksgiving, but we decided to replace the bag of frozen hash browns (as is suggested in the recipe below) with freshly-grated potatoes. I’ve grated hash browns for breakfast before for me and Molly, and it was no trouble. Just grate, steam in a pan and serve! Homemade hash brown potatoes for casserole aren’t as easy. Grating lots of fresh potatoes, enough to have a two-pound bag worth for a casserole, produces a lot of moisture, too much to bake into a casserole without risking a certain soupiness you don’t want. Over a period of about two hours, I grated potatoes, boiled them to remove a lot of the starchiness and then strained and drained them in a tea towel. Everything turned out great, but the process had me seriously sweating all over our kitchen the day before Thanksgiving.

The moral of this story is that this recipe for Hash Brown Casserole, the one we’re sharing with you below, is outstanding, just as it is. We DO NOT suggest you grate your own potatoes unless you really want to put in the work. Stick with the bag of frozen potatoes. It might say on the back, “Do Not Thaw,” but we removed our frozen hash browns from the bag and microwaved them for about two minutes before mixing them with the other ingredients, just to knock out some of the ice from the freezer to cut down on the moisture going into the dish in the oven.

Cathy and James, thank you for sharing this recipe for the elementary school cookbook all those years ago. Like so many other family favorites, it has stood the test of time. I would far prefer to make my own Hash Brown Casserole at home in lieu of fighting the crowd at Cracker Barrel. This recipe is the kind by which you can mix everything in one bowl and then cook it in one dish, which cuts down on cleanup, too. Our family ate this casserole up on the Thanksgiving table, and we’ve already made it again since. Enjoy! 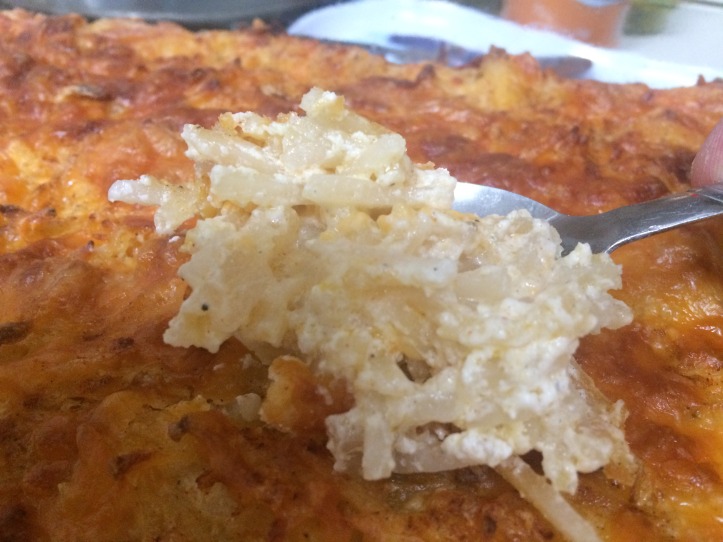 1 can cream of chicken soup

2. Mix all ingredients well, and pour into the dish.

3. Top with paprika and more cheese.

The recently opened @yummmdonut in @gogastonnc puts a certain beloved Southern chain to shame IOHO. 😯 Yeah, we said it. The donuts are more robust, flavorful and memorable than said competitor. 🍩 🥊 #FightinWords #FoodFight Everybody who eats donuts has a strong opinion about the best donuts. We have a few favorite mom-and-pop shops in the region west of Charlotte that are our favorites. In time, Yummm could join our list of go-to donut shops. In our opinion, Gastonia sure needed a unique local donut shop. Now for a local bookstore! 🤔📚
@superchix_fortmill has the sauce, y’all! 🤤😋 Incredible chicken, a sauce bar and seasoned fries! They have custard, too. 😯 If you or someone you eat with loves chicken tenders or sandwiches, this is THE place for you. We were VERY impressed. 👍👍
@thehootnannie in Forest City, NC is a party for the senses! Jammin’ music, elite burgers and Q, and tasty cheese curds as advertised! 🥳 @visitforestcitync and check it out, y’all! 🤤
🍳🥓🍅 Have we mentioned we’re breakfast-for-dinner fiends? 😏 Tonight: homemade biscuits, bacon and eggs, with our last homegrown tomato of the season ❤️
We don’t fry food often, but these easy fish fillets were great! Get the recipe at Facebook.com/FoodieScore!
🍅🥧 We made Mini Tomato Pies tonight with our final fresh garden harvest as we close out summer. ✌️
Loading Comments...
%d bloggers like this: